It’s been another busy week in the Second Year. Thank you for all the submissions, please keep them coming and remember: you will earn a merit for every article featured in the blog.

Some of the summer sports fell victim to the inclement weather last weekend but such things make no difference to the swimmers and the rowers who expect to get wet anyway. Thanks for sending in these reports, boys:

“The Second Years had a chance to experience rowing last Monday as around 50 boys took part in the first Rowing Taster Afternoon. The boys were trying out lots of aspects of rowing including a jumping competition and a wheelbarrow race. Then the two groups switched and we had to see how far we could get in three strokes on the ergos (rowing machines). Then we joined together again in the sports hall and did some squats. 130 to be exact. I’m looking forward to the next session!”

“On Monday 23 April a group of five First and five Second Years years walked to LEH to compete in the borough championships. Most of us had an individual race and then there were two relays for each of our age groups. The second years came first in one of the relays and second in the other. Everyone was excited to see what the overall results were but unfortunately the first years came 3rd and the second years came second. It was a great afternoon.”

A massive congratulations to the Junior Quiz Team, (Nick A, Conor M  and Akshat M, together with some students from the First Year) who have this week been crowned Regional Quiz Champions for the South East of England! A fantastic effort boys – we look forward to a full report of your exhilarating comeback victory over RGS Guildford. They will now progress to the national phase of the competition.

In addition, the Second Year Inter-Form Quiz begins next week. Forms will play each other in a round-robin tournament with the two best teams progressing to the final on 23 May. Good luck to all!

Please keep sending in your reports of clubs you have attended, it’s great to hear about them and very useful for those boys who are looking for a new activity to participate in. This week, Toby Gwynne shares his experience:

“Every Thursday, William, Tristan, Arjan and I have been going to Architecture Club. We started by cutting lino into parts of classical and gothic buildings. Then we went on to printing them onto an A3 piece of paper to create a building of either Classical or Gothic style and they all turned out really well!”

Kristian Wells is fast becoming our resident artist. This week he has sent us a drawing of a Strike Eagle military plane: 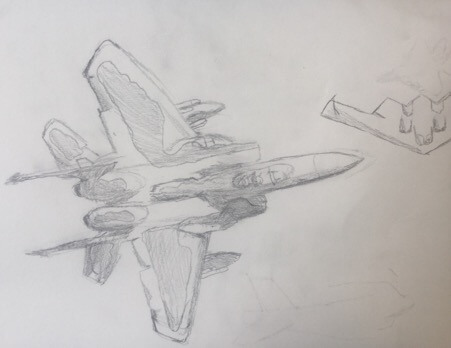 Well done to all those who worked out that the answer to Luke’s riddle was The Electric Chair because the power is out. This week, correctly answer Xavier Miklichansky-Maddox’s question for a merit:

Before Mount Everest was discovered what was the tallest mountain?

As a language teacher, this week I’ve gone with this one from Callum Howarth:

Q: Why can’t you run through a campsite?

A: Because you can only ran, it is past tents